Caswell Resort occupies the original site of the historical Queen’s Hotel. The Queen’s Hotel was destroyed by fire in 1890, was rebuilt, only to be lost by fire again in 1919. They rebuilt again, which is the structure that is here now, with additions added on through the years. Previously known as the Hotel Bernard operated as such until Mr Caswell purchased the site in the 1940’s after the WWII. It has since been known as Caswell Resort Hotel. 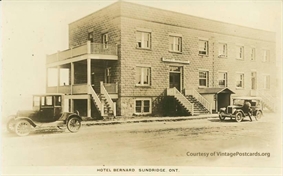